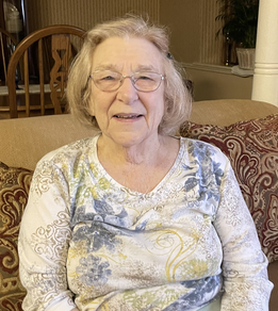 Dozens of children who have grown up in Kingwood Christian Church have been lucky to hear Bible stories from Betty Garber.

She helps kids relate to Bible characters as real people.

“When I was growing up, some of the Bible stories were taught in a fantastical way. But these people were supposed to be real people, so I teach them as real people. If they’re having political problems, I say they’re having problems with the government. Those Romans!”

Betty is a natural storyteller.

She started teaching Sunday school back in La Porte, Texas, years ago. Her husband, Lloyd, was asked to lead the choir. But singing is not her strong point, so she decided to teach Sunday school for children instead.

As a former high school home economics and seventh grade science teacher, she’s had plenty of experience with youth. She and Lloyd even took youth to church camp when they lived in Louisiana.

The youngsters growing up at KWCC have benefitted from “Miss Betty’s” wisdom since the Garbers joined the church in 1979 after moving to Kingwood from Baton Rouge.

Although she’s no longer doing Sunday sermons for youngsters full-time, she’s always happy to fill in. She’s done the children’s message on tricky topics like grief and death, marriage and faithfulness.

“We have a lot of non-heterosexual couples in the church. So I talked about finding your forever friend. I tell the kids always have God in your relationships. It really helps.”

Adults have shared stories with Betty too. She organizes a KWCC bunco group that is really more about friendship than it is about the game. Years ago, she said, there was an afternoon and an evening group. Now, it’s a small group that meets in the evenings once a month.

“We do play bunco, but mostly it’s a group of women who talk and laugh,” she said. “Laughter is good therapy.”

Another talent she’s shared is her love of cooking. In pre-Covid days, she started a Sunday supper group. The potluck dinners became so successful they outgrew the Garbers house and had to be held elsewhere.

At one time, she did all the meals for Big Gig, the Sunday children’s program. Even now, Children’s Director Lisa Aguilar said she can always count on Betty to prepare a meal.

Betty and Lloyd have been married for 58 years. Lloyd had been a Disciples of Christ congregation member so they belonged to DOC churches from the onset of their marriage.

They met as students at Arizona State University in Tempe. After graduating Lloyd took a job with Dupont that brought them to Texas. Betty taught in Victoria, Texas, and several other Texas cities before they moved to Baton Rouge.

They had three children, Gayland, Babette and Darcie, and three grandchildren, Rachel, Piper and Asher. Darcie died in 2020. Gayland lives in Phoenix and Babette and her family live in North Carolina where Babette’s husband Scott is a major stationed at Camp LeJeune.

On the day the Garbers moved to Kingwood from Louisiana, three women came to the house to welcome them and to invite them to an ice cream social at the relatively new Kingwood Christian Church. The women were all founding members of the church, which formed in 1977. “It was a lovely way to be welcomed to the community.”

Betty grew up in Arizona, where her father was a forest ranger.

“As a small child, all of my friends had feathers or four feet. When I did go to school, I liked my animals better than some of the people I met. We never lived in town.”

Betty has never lost her childhood love of animals. For years, she volunteered for an animal rescue organization, fostering many dogs and cats.

She told her own children stories of life in the country including a funny one about her father getting fertilized eggs from a rancher who was disappointed because they weren’t chicken eggs. Her dad brought them home to the family hen, who sat on the eggs. When they hatched, they turned out to be five ducks and a turkey.

Her advice to others who want to volunteer or get more involved in the church is to choose a place where you’re comfortable. ”I like to teach Sunday school,” she said. “Telling the truth about God is about the best deal you can get.”
This is one in a series of occasional profiles, written by Susan Bullard, on members of Kingwood Christian Church. Love 101: Do Your Part.